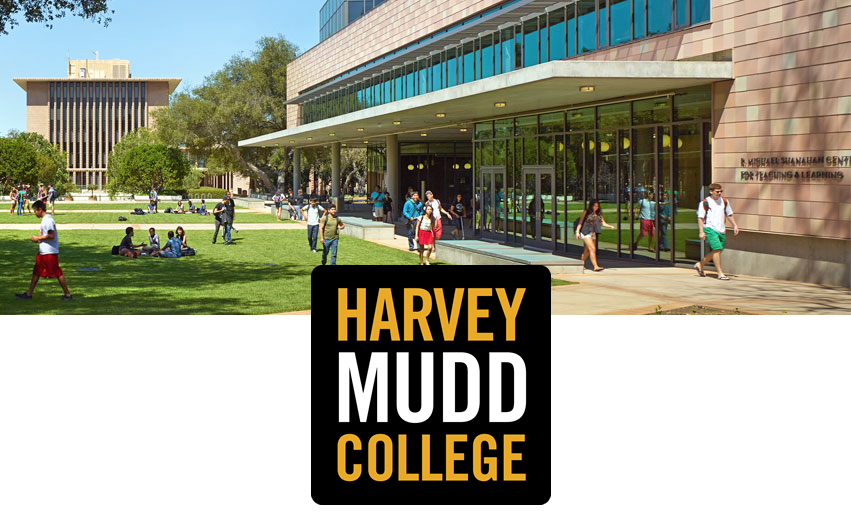 Launched by the Claremont College Consortium as one of their “decade” project schools during the space race in the 1950s, one of America’s smallest STEM schools, Harvey Mudd is now the top in its class for a leadership role in the sciences, engineering, and math. It is one of the best values for the money, with one of the lowest student to prof ratios of a STEM school.  Companies bring real world problems to Mudd, and many “Mudders” are already in good paying internships with major companies well before completing school.   Employers fight to get into their job fairs, and their placement in graduate schools send students to the top graduate and research programs in the world.

If you’re in the sciences or engineering, Harvey Mudd offers opportunities to students who are top-tier in STEM. Its size, under 1,000 students and access to resources normally found on the graduate level provide an undergrad resources to succeed at the top levels of their field.

One of the Claremont Consortium of Colleges a group of some of the nation’s top private colleges that began as Pomona College, founded in 1887.  Rather than turn Pomona into a university, it was decided that the sizable land grant to the college would be used instead to create a consortium of colleges, that would address different educational and social constituencies.  Claremont Graduate was founded in 1925,  Scripps, a women’s college, was founded in 1926, Claremont McKenna was founded in 1946, Harvey Mudd was founded in 1955 as the space race was under way, Pitzer College, with an emphasis on environmental and social justice issues was founded in 1963, and Keck Graduate Institute (Business) was launched in 1997.  All of the schools are adjacent to one another, and students can easily take courses, or participate in the campus life of other schools, dine in their dining halls, etc, which gives them the scale of a larger university with the focus of a world-class small college.

Harvey Mudd is located in Claremont, California, about 30 min. Northwest of downtown Los Angeles, and accessible by car or the Metro train and a bus.  Major airports include Ontario (ONT) 10 mi from campus, Los Angeles (LAX), 50 miles from campus, and 46 miles to Bob Hope Airport in Burbank (BUR).  With direct flights to Los Angeles daily, it is about a six hour non-stop to LAX from FLL.  Claremont colleges were located far enough away from Los Angeles to avoid the “distraction” of an urban campus like a UCLA or a USC, but to be close enough to major urban areas like Pasadena (Metro Train) or Los Angeles (Metro Train) that students would be able to use all of the resources that a big city has to offer. Via Metro, students can get to the beach in about two hours.  Freeways abound, if mass transit isn’t your thing, and you can go anywhere by car, although possibly not much faster, as LA, like New York, is one of the more congested cities in America.

Mudd works on a quarter system and, like MIT and Caltech, they have gone to a Pass/Fail system in the first two quarters to give students a chance to acclimate to the program.

Mudders are not required to select a major until the end of their sophomore year. The Mudd Core Curriculum gives students experience each academic department before being faced with selecting a major, allowing them to make a more informed choice.

All Mudd students sign an honor code agreement in their first year at the school.  It is a peer-to-peer agreement that covers everything from closed-book exams that students have in their dorm rooms to  respecting other people’s gear in public spaces to how they interact with one another.

Mudd has an exceptional system where students and faculty work together to assess what is being learned, and how it can be improved upon for the individual student. There is no herd thinking in the design of their assessments of what a student learns.

Mudders are very engaged in the community locally and around the world. They teach STEM topics to high school students and help villages with water projects, and myriad other projects in a wide range of communities.

The school does decently in the area of ethnic diversity, with 38% of the school White, 20% Asian,  and 12.7% Hispanic.  What is still an area needing improvement is their low 7% African-American enrollment. Gender diversity is good, with 46.6% of the latest class to be admitted being female.  Diversity is a priority, and the school has been improving in all areas, including faculty hirings.

Mudd participates with the Claremont Colleges in Division III and intramural sports. Harvey Mudd College, Claremont McKenna College and Scripps College are associated in a joint program of intercollegiate athletics, intramural and recreational activities, physical education and club sports known as Claremont-Mudd-Scripps (CMS) Athletics. A list of facilities can be found at the CMS Athletics website and include:

Music is a calling card here. Many students play music. There are performances at the Drinkward Recital Hall on campus, and students participate in the Claremont Joint Music Program in a wide variety of areas. Students interested in Drama or fine art would take courses at Claremont.

Most of the students live on campus,  gravitating to one of the houses that function more like English colleges in that they become places where they develop social ties that keep them at that housing during their time at Mudd. There are newer dormitories but they will go to upper classmen.  The older dorms are well maintained and have top-grade wifi in every room (Node/box inside the room).

Mudd has one dining hall, but students in the newer dorms often go to the dining hall at Pitzer College, which is closer to them. You can dine at any of the facilities on any of the campuses in the Consortium, and, since Mudd students make friends at other campuses, they will, on occasion, venture out to those dining halls, but, for the most part, they move back and forth between those two.  There is also a coffee house/light food place located right in the main building of the college that serves Starbucks coffee.

Students love Mudd. They have a 96% to 99%. freshman retention rate.  Life on campus is highly engaged, with students involved in academic research projects, clubs, and live events not just on their campus, but on the other campuses as well.  Speakers, concerts, comedians, and entertainment events that come to one campus are open to all.

Off campus, the immediate area is not a thriving social scene, but it is easy, by car or by light rail or commuter rail, to get to nearby Pasadena, Los Angeles, or even go to the beach down in Redondo Beach or Santa Monica.  Disneyland (Anaheim), Universal Studios, and Six Flags Magic Mountain are all within driving distance, and many can be reached with rail or light rail transit.

Mudd offers both school year and summer study abroad opportunities that do not impact graduating on time from most programs.

Another unique facet of Mudd in a day and age where schools put students through them like sausage through a grinder, and quantity is not quality, is that Mudd’s faculty is highly engaged with the students not only in the classroom, but as people.

Harvey Mudd is transparent about its desired outcomes. They are looking for people who can think outside of the box, solve problems, and communicate well. Humanities and public speaking are therefore priorities in the curriculum.

As students approach their senior year, their department reviews their desired career outcomes and their professors, not a career office or other officer that doesn’t know them, provides them with suggestions. Sometimes it’s the right professor at a graduate school, or access to a research program, or to jobs connections with alumni or companies that have done research projects with students and/or faculty in the past.

Students often work on capstone projects where real-world companies, from Google to a company needing engineering expertise for a zipline system in Hawaii, bring in problems for teams of students to solve.  Their job fairs are frequented by top companies in a wide variety of fields. Their students who go directly to pursue a terminal degree (often a Masters/Ph.D. in two years) are some of the top core class at the nation’s best graduate programs.

US News ranks it as their No. 1 undergraduate engineering school.

Mudd has a dedicated alumni that stretches back 60 years.

Their website is excellent, and answers many important questions here.  If this is your first choice, or a high choice, make sure that you take an interview with an alumni interviewer. Apply Early Decision or Early Action as well if this is a top school for you. They only see a small handful of applications from the South, which makes up about 6% of this year’s admitted class, so the geographic diversity bounce can be helpful to you here, versus schools like UF, MIT, etc. with heavy Florida population concentrations.

AP courses may not receive college credit, but they do receive attention for RIGOR, which is the key word about your profile.  What have you done to challenge yourself in high school?

They take the SAT or the ACT, BUT, you MUST take the SAT Math II Subject Test and really nail it. This year’s class of accepted students had a 750 to 800 on it.

You can find out more about applying to Mudd here.

This school was toured in June of 2016. The tour overall was exceptionally positive. They took the tour into classroom spaces and their project spaces, as well as around the campus. The tour guide was well informed and gave a very thorough view of the school and its programs. There was no shading about “undesirable” parts of the program, or campus, or outcomes. An excellent tour that is highly recommended if you plan on including this school in your list.

We award Harvey Mudd College 5 diamonds out of a possible 5:  One diamond for quality of life .  A diamond for education for their amazing faculty, tiny size, graduate-level research opportunities, excellent course offerings, and the high value that their students hold in both the private sector and at the nation’s top graduate schools. You will be one of the leaders in your field if you commit yourself to succeeding here. One diamond for diversity for making strides in bringing more women into a STEM school and for working to improve their African-American student population.  We give them a diamond for cost & financial aid because, while their tuition is rising, they work hard to keep the student’s debt low and offer merit as well as need-based aid. The final diamond is for their admissions process. With interviews, it is old school personal and hugely fair. If you are on a STEM track, and a 4.8 or better (HPA) student with a great resume, this should be a serious contender with other top schools.